How to Write a Thesis on Physics 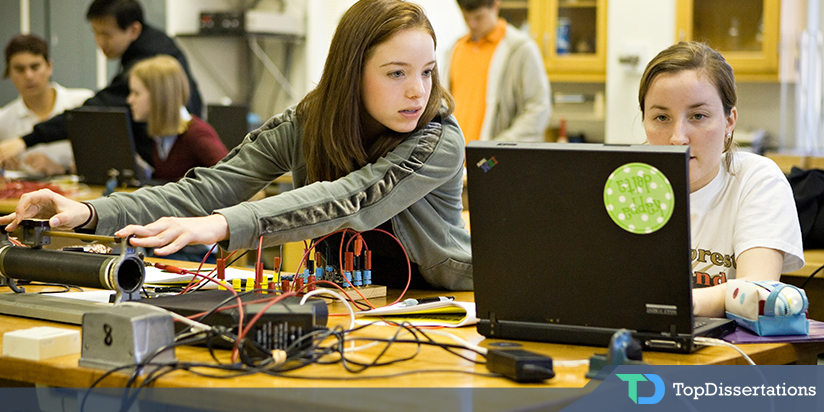 Many people share a misconception that a scientific thesis is the lengthier version of a simple scientific paper. In reality, however, a thesis has a whole set of features that distinguish it from other types of academic writing. In this article, we'll focus on the question of how to rite a thesis on physics.

The core of a physics thesis is a research. In fact, your thesis is nothing more than a report of how this research went. The main constituents of a thesis are: the problem in your field that you're going to study, previously discovered information on which you're going to base your research, your actions towards the solution, analysis of the results you've got, and your predictions of practical implementations of these results.

Physics theses are arguably the ones that are used most frequently after having been completed. Laboratory workers who want to conduct experiments to check your theories will have to refer to your work on numerous occasions. If your thesis has a connection with other sciences, it's also possible that specialists working in those spheres will show some interest. That's why most theses are now stored electronically and are available for immediate usage.

How Detailed Should It Be?

Unless you're going to become a professor at university, your thesis will be probably the most extensive piece of writing you'll ever compose. This means that it has to be quite detailed. Physics is not a simple science, and once you start putting your research into words, you'll notice that you need lots of them to explain all complexities. However, keep in mind the fact that your thesis will likely be read only by people who are qualified in the field so there is no need to explain things that a common physicist already knows.

Define What Is Know and What Is New

The easy answer to the question how to write a dissertation on physics is the one you'll get referring to any kind of academic writing – always cite discoveries that don't belong to you. In academia, plagiarism is the biggest crime so you have to mention initial sources every time you base your assumptions on someone's ideas. The exceptions can become only those facts that have already been known to everyone for a while. For instance, you don't need to refer to Newton every time you mention a dynamic equation.

Citing is important in academic writing because it expresses the amount of your own input. Physics is the science that moves upwards – the result of one research creates the basis for another one and so on. As a result, you simply cannot avoid citing numerous resources because without previous discoveries you cannot make your own.

It's very easy to fall into temptation of avoiding citing some ideas that don't belong to you in order to create a positive impression of you for the reader. This might take two turns. If your reader is a professional, there is every likelihood that they're already familiar with the idea from its original source so you risk losing all trust to you as a scientist. If your reader is a common person, they will most likely be impressed by your groundbreaking discoveries. However, eventually they'll stumble upon the original idea, and once again, your reputation will be undermined. So whatever your motive is, avoiding mentioning references is never going to work in your favor.

Another misconception that needs to be debunked is the belief that all academic papers are extremely formal. Yes, they definitely need to be more formal than this text you're reading now, but at the same time, they need to be easy to read. So the best tip about how to write a Ph.D. thesis on physics is to make the text clear as far as this adjective can be appropriate when talking about physics. You should, of course, avoid slang and spoken language but using dictionary words is justified only if they are specific terms. For example, "now" is still as professional and scientific as "at this point in time."

As surprising as it might seem, short sentences are also not a negative feature to include in academic writing. Studies show that politicians, for example, tend to use very long and elaborated sentences because they help them to win time and sound more knowledgeable. That's not something you want to do in a thesis. On the contrary, long sentences will also be necessary for cases when you need to describe a complicated idea. All in all, make sure you use a variation of different types of sentences.

One trick you should be familiar with is presenting information as separate points on a list. This will help you to avoid long awkward sentences and the struggle of coming up with synonyms for the same words. This approach is justified to be used occasionally but don't abuse the power of conciseness.

Physics thesis paper is not a book you would want to sell, so focus on the content instead of appearance. This means that while diagrams and tables can be very helpful, don't struggle too much with designing them because that's the time you could use for doing more productive improvements in the text. If your computer skills are limited, and you find making diagrams electronically time-consuming, you can always sketch them by hand and upload a scanned copy to the thesis. This would influence the size of the file, but a black and white scan won't do much harm. Speaking of damage, avoid the temptation of uploading photos into the paper because while being aesthetically pleasing, they consume too much memory.

Finally, start planning your physics thesis outline long before the deadline. By that, we mean months and months ahead. A scientific thesis is a very extensive piece of work that you won't be able to write overnight the way you could do it with essays. The proper time management in this challenge is the core of success.