There are a number of global serious effects on the environment due to global climate changes that already taking place. Specifically, some of these include trees blossoming sooner than expected, glaciers shrinking, ice on lakes and rivers breaking earlier, and animal and plants ranges shifting. Some of the effects that scientists forecasted in the past that could be effected by the global climate change have already occurred and continue taking place. For instance, some of them include strong heat waves, the rise of sea levels and loss of sea and mountain ice caps. According to scientists in this specific area, the global temperatures will continue increasing for many years to come especially due to human activities that releases greenhouse gases to the atmosphere. The effects of global warming and climate change have created a growing danger to the ecosystem damaging environment in many ways and threatening our own existence.

First, global warming and climate change have led to increased temperatures. According to the Nature Conservancy, the last five hottest years that have been recorded by scientists happened after 1997. Apparently, this situation takes place due to increased emissions of gases by automobiles, power plants and deforestation. The high temperatures are blamed for increased illness, heat related deaths, rising sea levels and increased intensity of storms. According to scientists, if the current increase in temperatures continues, then the earth’s surface temperatures will increase by 3 – 10 degrees Fahrenheit by the end of this century.  Moreover, the water in oceans increasingly becomes warmer which results in devastating effects including rising sea levels, coral bleaching and stronger storms (Climate changes impacts higher temperatures, 2016). To reduce global temperatures, people should have concerted effort to reduce emission of greenhouse gases to the atmosphere. Additionally, fuel guzzlers should be reduced, cycle to work, and employ the use of machines that emit less carbon dioxide. People should also amplify a global blue print for a clean energy (Union of Concerned Scientists, 2016).

Second, climate change and global warming have resulted in increased sea levels due to melting of ice. According to Schlossberg (2016), the current year 2016 is off to a record-breaking start in terms of intense temperatures. Data from the National Oceanic and Atmospheric Administration (NOAA) indicate that 2016 has been the hottest year recorded since the 1800s. Alongside Japan Meteorological Association (JMA) and NASA, NOAA used different methods to show that each year global temperatures become higher. By this time, warm temperatures are said to have caused the early El Nino rains as scientists had predicted that high amounts of heat from the oceans caused heavy rains which influence irregular weather patterns. Further, scientists comparing El Nino which currently takes place with the last one (1997-1998) found out that the 2016 El Nino raised global temperatures by more than 0.8 degrees. March was the hottest month so far, and may have signaled the last gasp of such torrential rains. Therefore,  NOOA scientists experience certain worries that after the last two years (2014 and 1015) being extremely hot, they may have ushered devastating effects of global warming as seen in the last few months of 2016. For example, the arctic has seen an increase of about 6 degrees in average temperatures and this may spell doom for the Arctic sea ice. A number of cities like Miami, New Orleans, and Manhattan which are located near coasts are threatened by the rising sea levels. Therefore, there is the need for the United Nations (UN) to initiate the gathering of world diplomats to urgently sign a climate agreement to lower greenhouse gases (Schlossberg, 2016). The figure below shows that sea level changes have increased as from 1870 to 2000. The figure further shows that the sea level has increased by about 200 mm and the main reasons for the increase is the melting of ice and expansion of water due to this reason. 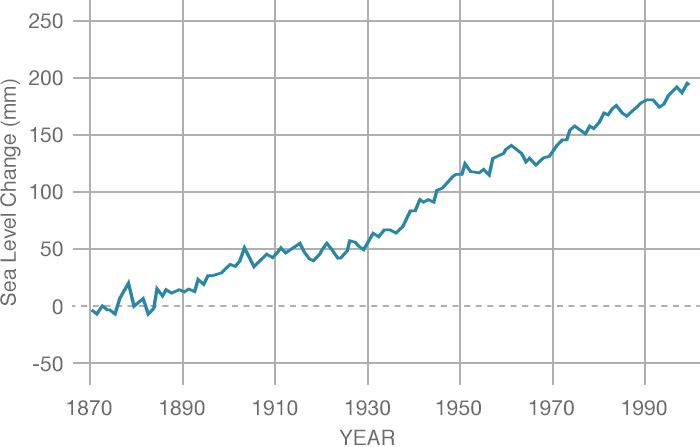 Third, climatic changes have seen intensified water circulation below and above the earth’s surface. This causes drought and floods to be severe, more frequent and widespread. According to the diagram above, high global temperatures increase to more evaporation from the oceans and land. Intense evaporations are likely to lead to serious droughts; consequently,  the affected drought lands are more vulnerable to flooding once the rain pours. The soil is prone to soil erosion and the top fertile soils are carried to rivers and oceans. As global temperatures rise, the droughts will not only become more frequent but also more severe. Such intense droughts have devastating consequences for the human health as is associated with increased illness and even deaths. Agricultural production is also affected as is water supply. Hot temperatures and dry weather will increase the occurrence of forest fires. A number of such phenomena have already occurred in the recent past. For example, in the US’s conifer forests, the amount of land burned has gone up by 650 percent while fire frequency has increased by 400 percent since the 1970s (The Nature Conservancy, 2016). NASA further asserts that potential effects of global climate like frequent fires help in clearing some animal species. There is need for concerted human effort to help restore natural and add on forests by planting more trees, reducing on deforestation.

Lastly, the current climate change is already touted as affecting the world economy. It is estimated that if nothing is made to prevent the unprecedented greenhouse gas emissions, then climate change may cost the word economy about 5-20 percent of its GDP. In contrast, it will just take only 1 percent of the world GDP to lessen these devastating effects of climate change. For example, intense rainfall and hurricanes can cause billions of damages to property and infrastructure. Prolonged droughts will also lead to declining crop harvests, especially in the African continent. Consequently, this will put in jeopardy millions of people at risk of starvation. In the Southern England, for example, the number if lobster catches have plunged due to heat stresses. Rising temperatures have also lead to higher number of parasites that caused the lobster reduction. In Lake Erie, increased climatic temperatures have been seen to lower the lake level which  has altered the lake’s shoreline habitat. Relocating the ports and its entire infrastructure will cost millions of dollars further devastating the earth’s limited resources. It is estimated that coral reefs generate about $375 billion each year. In fact, this economic lifeline for thousands of people is already threatened (The Nature Conservancy, 2016).  To effectively reduce the amount of damages to earth, we must address the issue of greenhouse gases. There is need to reduce the heat trapped in our atmosphere and it is good news that technological advancement can help accomplish the task. We can also rely more on clean power rather than fossil fuels that are said to increase the emission of dangerous gases into the atmosphere (Union of Concerned Scientists, 2016). Economic damages solution can also include shifting from deforestation to afforestation. This will ensure more plant cover and with a predictable weather that will ensure we have constant and predictable production of food (Union of Concerned Scientists, 2016).

Get Discount Now Get 15%OFF

for your first order with the code get15off

{Opposing view}What if all this global warming and climatic changes affecting our lives negatively is just a hoax? There is contradicting evidence that all the talk about increasing temperatures. The report indicates that in 2014, there was a record sea ice in Antarctica that some global warming expedition got stuck there and thus a hottest year with record ice. The report further indicates that the oceans are rising at a much less rate than as predicted and are unlikely to rise by 2o feet by 2100. Polar bears are said to be getting slowly extinct but the report indicates otherwise; polar bears are thriving which should not be the case in the “hottest years.” the report further indicates that nature produces more CO2 gases than from industrialized nations. They quote a study by NASA that showed that there is more CO2 from the South America rainforests than from industrialized nations. So, it may be that after all global warming is not happening and it is just a scam (Elmer, 2015).