This research paper describes the process of photosynthesis and cellular respiration stages as well as their interactions, interdependence, and significance to evolution and diversity of life. Light-dependent reactions represent the first stage of photosynthesis occurring in thylakoid membranes of chloroplasts. Light from the sun is converted to NADPH and ATP in the presence of water. These products enter the Calvin cycle – light-independent process that occurs in the stroma of the chloroplasts. The cycle starts with carbon fixation. Then, the reduction stage and, finally, regeneration follow. The products of photosynthesis are sugars and oxygen. On the other hand, cellular respiration utilizes the photosynthetic sugars to generate energy. Glycolysis, the first stage of cellular respiration, occurs in the cell cytosol to make pyruvate molecules that enter the Krebs cycle and, later, the oxidative phosphorylation phase. The end products of this process are energy and CO2. These processes are interdependent since the byproducts of each one of them are used by the other. What is more, they both stabilize oxygen and carbon in the biosphere, which sustains life and its diversity.

Living organisms require carbon acquired from the atmosphere not only to provide energy but also to form various body structures. Berg, Stryer, and Tymoczko (2012) explain that photosynthesis provides the necessary carbon that constitutes structures and carbohydrates. Cellular respiration, then, utilizes the synthesized carbohydrates molecules in generating of the energy required for the survival of living organisms. All these processes occur due to a series of steps in specific cell organelles. They are responsible for maintaining the levels of carbon and oxygen in the biosphere and, therefore, support evolution and life diversity. This paper attempts to describe the processes of photosynthesis and cellular reaction, their interdependence and interactions as well as and their significance in evolution.

The process of photosynthesis occurs in plants in two stages. The first one is the emergence of light-dependent reactions, which the Calvin cycle follows. The initial stage, during which the light energy from the sun is converted to energy in the adenosine triphosphate (ATP) and NADPH form, takes place in the thylakoid membranes of the chloroplasts. According to Berg et al. (2012), the first step of photosynthesis is the absorption of light energy by the chlorophyll in chloroplasts that results in the formation of electrons and oxygen from water. The electrons move to the electron acceptor. In the thylakoid membrane, they go through a chain of electron transport molecules reaching NADP+, the ultimate electron acceptor, and reducing it to NADPH. Therefore, the end products of the light-dependent stage are the NADPH and ATP, which are instrumental in the success of the Calvin cycle, and oxygen gas as the by-product.

The molecules of NADPH and ATP from the previous stage enter the Calvin cycle; through a series of reactions, sugar molecules are formed. Carbon fixation is the initial and rate-limiting step of the cycle. Ribulose-1,5-biphosphate (RuBP) is converted into a reactive intermediate at the beginning of the process. On the other hand, carbon dioxide (CO2) enters the interior of leaves through the stomata and diffuses into the stroma of chloroplasts. The reactive RuBP intermediate combines with the diffused CO2 to form a six-carbon molecule compound. This compound further splits into two molecules with three carbon atoms each, 3-phosphoglycerate (3-PGA). An enzyme called RuBP oxygenase or RuBP carboxylase or rubisco is responsible for the catalysis of this reaction. 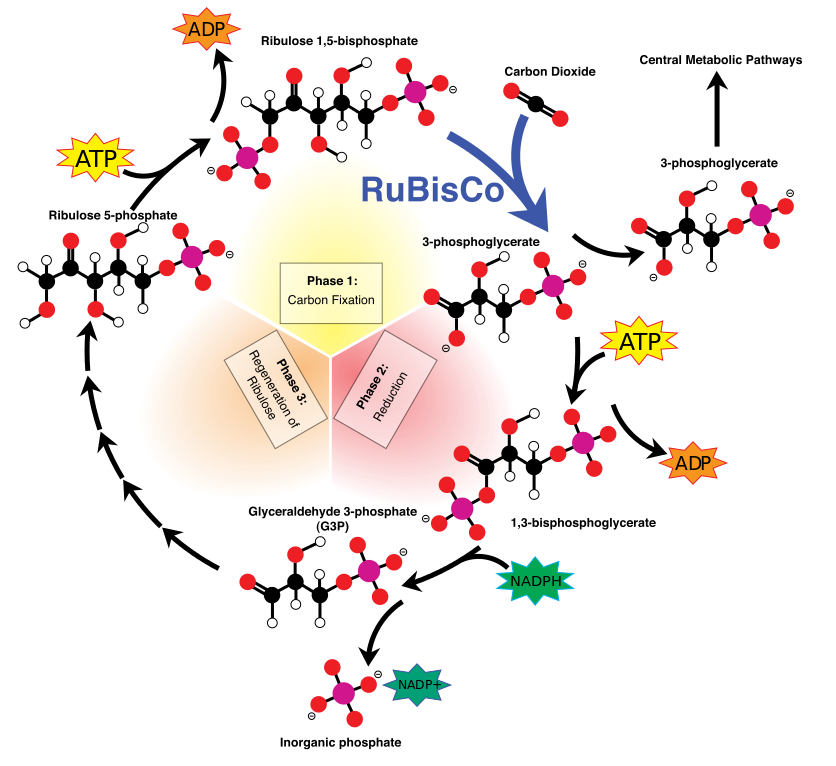 In summary, the process of photosynthesis starts with the presence of solar energy or light and water. Formed NADPH and ATP enter the Calvin cycle, which is independent of light. This cycle requires six rounds for completion because in each round, only one carbon atom is being reduced. 12 molecules are consumed during this process in the phosphorylation of 12 molecules of 3-PGA to glyceraldehyde 3-phosphate. Therefore, for 12 molecules of 3-PGA to be reduced to glyceraldehyde 3-phosphate, 12 molecules of NADPH are expended. The equation below summarizes the whole process including the requirements and products of the Calvin cycle:

It shows that it takes 6 CO2 molecules, 18 ATP molecules, and 12 NADPH ones in the presence of water to produce a single molecule of glucose. Therefore, the whole process requires CO2 and water as raw materials and energy in the form of ATP and NADPH to make carbohydrates.

Living organisms need energy for the proper functioning of cells, tissues, and systems. It is through the cellular respiration that cells harvest energy in the form of ATP from carbohydrates synthesized during the process of photosynthesis. Cellular respiration occurs in eukaryotic cells, and the mitochondria are the organelles, in which most part of the respiration process happens. The three most important stages of this process are glycolysis, citric acid or Krebs cycle, and electron transport chain (also called oxidative phosphorylation).

It is the initial step in the process of cellular respiration. Vasudevan, Sreekumari, and Vaidyanathan (2010) explain that this stage is an oxygen-independent metabolic pathway since it does not require oxygen to occur. Glycolysis starts in the cell cytoplasm whereby glucose molecules are partially oxidized and broken into two molecules of pyruvate, each of which contains three carbon atoms. Unlike pyruvate molecules, the 2 ATP ones are produced per molecule of glucose as well as 2 NADP molecules carrying two electrons that enter the next stages of the respiration process.

of every order placed by your friends!

We help you reap financial benefits

Nicotinamide Adenine Dinucleotide (NADH) and pyruvate enter the Krebs cycle for metabolism. The oxidation of pyruvate leads to the formation of acetyl-Coenzyme A (acetyl-CoA), release of two CO2 molecules, and the formation of NAD from NAD+. Acetyl-CoA, then, reacts with oxaloacetate constituting citric acid, which is, then, converted to citrate isomer. The isomer further undergoes oxidation and releases CO2 leaving behind α-ketoglutarate. It is during this step that the NAD+ reduces to form NADH through the action of isocitrate dehydrogenase, an enzyme that regulates the speed of this cycle. Next, α-ketoglutarate is oxidized, further resulting in the reduction of NAD+ to NADH with CO2 formation. The remaining 4-carbon molecule binds Coenzyme A to form succinyl-CoA. Ketoglutarate dehydrogenase, an enzyme that further regulates the cycle, catalyzes this step.

On the same line, succinyl-CoA goes into the next phase. Phosphate that is transferred to ADP to form ATP replaces Coenzyme A. Succinate is also produced. The oxidation of succinate and formation of fumarate result in the transfer of 2 hydrogen atoms to form flavin adenine dinucleotide (FADH2) from FAD. Water is, then, added to fumarate to produce malate that, in turn, undergoes oxidation to form oxaloacetate, a process that again reduces NAD+ to NADH.

NADH and FADH from the Krebs cycle enter the electron transport chain. Nelson et al. (2008) explain that they release electrons to the chain starting a process that takes place in mitochondrial cristae. The movement of electrons down the transport chain releases energy that pumps protons out of the mitochondrial matrix forming a gradient. Then, the protons flow back into the same matrix, which results in the formation of ATP molecules from ADP, a process catalyzed by the enzyme ATP synthase. At the end of this chain, water is being formed when oxygen, the electron acceptor, combines with protons.

Interdependence and Significance of Photosynthesis and Cellular Respiration

Photosynthesis occurs in chloroplasts whereby plants take water from the soil, CO2 from the atmosphere, and light from the sun to produce energy in the form of glucose for plant use and oxygen release into the environment. On the other hand, cellular respiration happens in mitochondria except for glycolysis, which starts in the cytosol. This process utilizes the glucose synthesized through photosynthesis to produce energy in the presence of oxygen and release of CO2 into the air. The two processes are interdependent because photosynthesis produces CO2 as a by-product, which is useful in cellular respiration that, in turn, makes CO2, a raw material for photosynthesis. Most importantly, the latter provides necessary carbohydrates for use in the respiration process.

In addition, the two processes are significant to evolution and life diversity. Carbon is the backbone of any structure of living organisms that require oxygen for survival. According to Millar, Whelan, Soole, and Day (2011), as a pathway, the carbon cycle enhances the recycling of carbon in the biosphere. The release of CO2 and absorption of oxygen by cellular respiration as well as oxygen release into the atmosphere and absorption of CO2 by photosynthesis keep these gases presence in the environment at stable levels. Most importantly, these processes provide organisms with energy for survival and generate necessary carbon to form critical body structures and molecules.

Photosynthesis occurs when plants use CO2 and water to produce carbohydrates in the presence of solar power while cellular respiration utilizes the carbohydrates to produce energy. The process of photosynthesis starts with the light-dependent reactions before ending in the Calvin cycle. Its by-product is oxygen, which is essential for cellular respiration. On the other hand, the cellular respiration begins with glycolysis in the cytosol, which the Krebs cycle and oxidative phosphorylation follow; they all occur in mitochondria. The outputs of this process are energy and CO2 as a byproduct, which forms the raw material for photosynthesis. The two processes interact since the byproducts of each one of them form the raw materials for the other one. The processes also enhance evolution and diversity of life since they regulate the carbon cycle.