Paintings depict some of the social, economic, and political organization of the people of the time they refer to. They also help identify the primitive tools that these people used during those times. Ancient and foreign old paintings have been preserved for the people to see and to study. Cave paintings were useful during the Stone Age period since they facilitated communication. In this paper, we shall discuss the famous painting of Mona Lisa by Leonardo da Vinci, the feelings that people developed towards it, and why it is referred to as one of the greatest artworks ever. This paper will also study the person behind the magnificent work and how it has changed our thinking and attitude towards the artwork. The historians who tried to figure out some of the fantastic symbols in the painting are also discussed in this paper.

Eye Review of the Artwork

Eye review involves figuring out that can be seen with the naked eye without the aid of an instrument. It entails what an average person can directly identify with ease without having any skills to interpolate the painting. 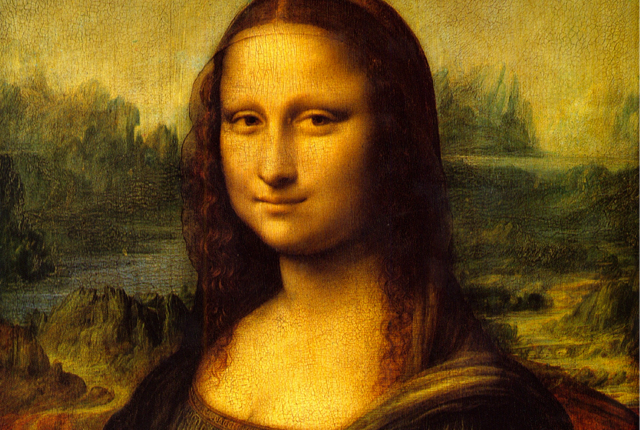 Just by looking at the painting, one can know the type of attires that the Italians used to wear at that time. The background shows a dusty and rugged road, indicating that the civilization was still not at its best and tarmac road had not yet been invented at that time. The painting also contains different colors and shades. The face of the woman appears to be brighter than the background. This indicates that the art of color mixing was present at that time and it was used in making some of these renowned paintings. Just by looking at the painting itself, one can find many interesting things. The fact that the painting shows Mona Lisa lacking eyebrows is striking issue. One is left to wonder if she had shaved them or it is the artist’s omission.

Leonardo da Vinci has been the most recognized and respected artist in the art history. His painting of Mona Lisa has been the most popular one for many years, and it will continue to be. Da Vinci used a cottonwood panel to act like the surface of the painting, which has mostly attributed to the fame of “Mona Lisa” since a large number of paintings are usually commissioned as oil on canvas. The amazing thing is that the medium used for the painting has been able to survive for more than six centuries without the need to restore it.

There were symbols and secrets hidden in by Da Vinci in his “Mona Lisa”. The transparency the veils indicates that Da Vince had decided first to start by painting the landscape and later decided to use the transparency techniques to paint the veil on top of it.

Several themes played a great role in uniting Da Vinci’s eclectic interests. He firmly believed that the most important aspect of humankind was sense, and it was a vital aspect of all living things. It was known that he used to spend significant amount of time interacting with nature and the surroundings to develop ideas, think, and write down all his findings. This helped him greatly to improve on his skills in drawing and painting since he could easily come up with a mental picture of anything that he wished to paint or draw.

The painting of Mona Lisa is very dear to the country of France even though Leonardo da Vinci is Italian. In 1911, the painting was stolen from the Louvre. France was in grief, and thousands of people visited the Louvre to make sure that the painting had indeed been lost.

Pascal Cotte is another art scientist from France who developed significant interest in the painting of Mona Lisa. Pascal dedicated great amount of his time shining very strong lights on the painting of Mona Lisa; he measured the reflections with an aim of mapping the layers that were beneath the surface of the painting. Pascal identified that the unsmiling woman was indeed the actual Mona Lisa and not the Lisa Gherardini, who was the wife of a silk merchant.

Meaning of the Painting to Those Who Viewed It

The painting was quite important to the people who saw it. It is still as important to the people who see it even today. The artwork shows the creativeness of man and the ability to use simple things from the surrounding such as oil and cottonwood panel to create something magnificent that can last for many centuries. The painting is a great inspiration to the modern day artists that they have what it takes to achieve big things in their area of expertise.

The Meaning of the Painting to da Vinci

The painting was a great inspiration to Leonardo da Vinci. It had had him receive many accolades in the field of painted artwork, which brought him to the fold of the most celebrated artists for very many years. The painting of Mona Lisa made da Vinci become more creative and come up with the painting of the “Last Supper”, still one of the best paintings up to date.

Symbolism in the Painting of Mona Lisa

An art analyst and scientist called Silvano Vinceti claims to have found some symbols in the painting. Vincenti was able to find the letter S in the left eye of Mona Lisa, the letter L in her right eye, and 72 in the arched bridge of the painting. According to Vinceti, the symbols can significantly help to identify the model, making it possible to identify the date the painting and find about out da Vinci’s interest in mysticism and religion.

Comparison of My Earlier and Current Feelings about Artwork

My feelings about the artwork have changed greatly after reading more about it. I have come to appreciate some styles, such as symbolism, that are mostly used in the art. Symbolism came to take various forms depending on the information intended to be communicated to people. Symbolism helps to reach a small target group, and the information cannot be easily understood by those not intended unless someone with the full knowledge informs them. Symbols help to keep the secret of people, and the paintings or artwork contributes to preserving the information or the message.

I thought that paintings were done just for fun and they had no information to pass to people. I figured they were just decorations only to find out that I had been quite mistaken. My perspective changed completely and I had to observe any ancient painting trying to figure out what it meant or whether it contained any information.

I know that paintings used to show the cultural heritage of a group of people, and I was amazed to realize that I had been right about that. Things cannot just happen; there is always a good reason as to why paintings are made in particular places and not any other place. We could appreciate the significant achievements made by great people, such as Darwin, for example, who studied the early life and the amazing things that had occurred very many years ago.

The vast knowledge that we enjoy today in the field of architecture was in use very many years ago in the construction of the great pyramids by the Egyptians. We have all reasons to preserve the great works of the ancient art since there could still be great information and the ideas not yet figured out by a man. Many pieces of art still keep hidden ideas to be studied by art historians.

Changes Taking Place in the Artwork

Art has been considerably improved in the recent times because humankind has become more intelligent and invented tools such as computers that aid in producing more complicated, advanced, and better forms of art. Art is being studied in the learning institutions; thus, people acquire the skills early enough to perfect on them. Art might evolve quickly, but what is evident is that the principles will remain. The significant changes that can be said to have taken place in art are the use of the current modern technology.

During the early times, there was no formal way to study art. It was an inborn talent, a gift that only particular people in society possessed. Nowadays, anyone can be trained and still do well in art as long as they have the willingness in them to learn.

Creativity and the use of other skills such as color mixing have also been widely used in art, unlike in the early times. Painting can have as many colors as possible as long as the work holds the meaning and shows a good job done by the artist.

We have all the reasons to perceive fascinating artwork and appreciate the great work done by the pioneers of art. Symbols used in the artwork are of great significance since they help communicate in a figurative manner. Artworks help to preserve the cultural heritage of a group of people ensuring that it will be safe for the years to come.